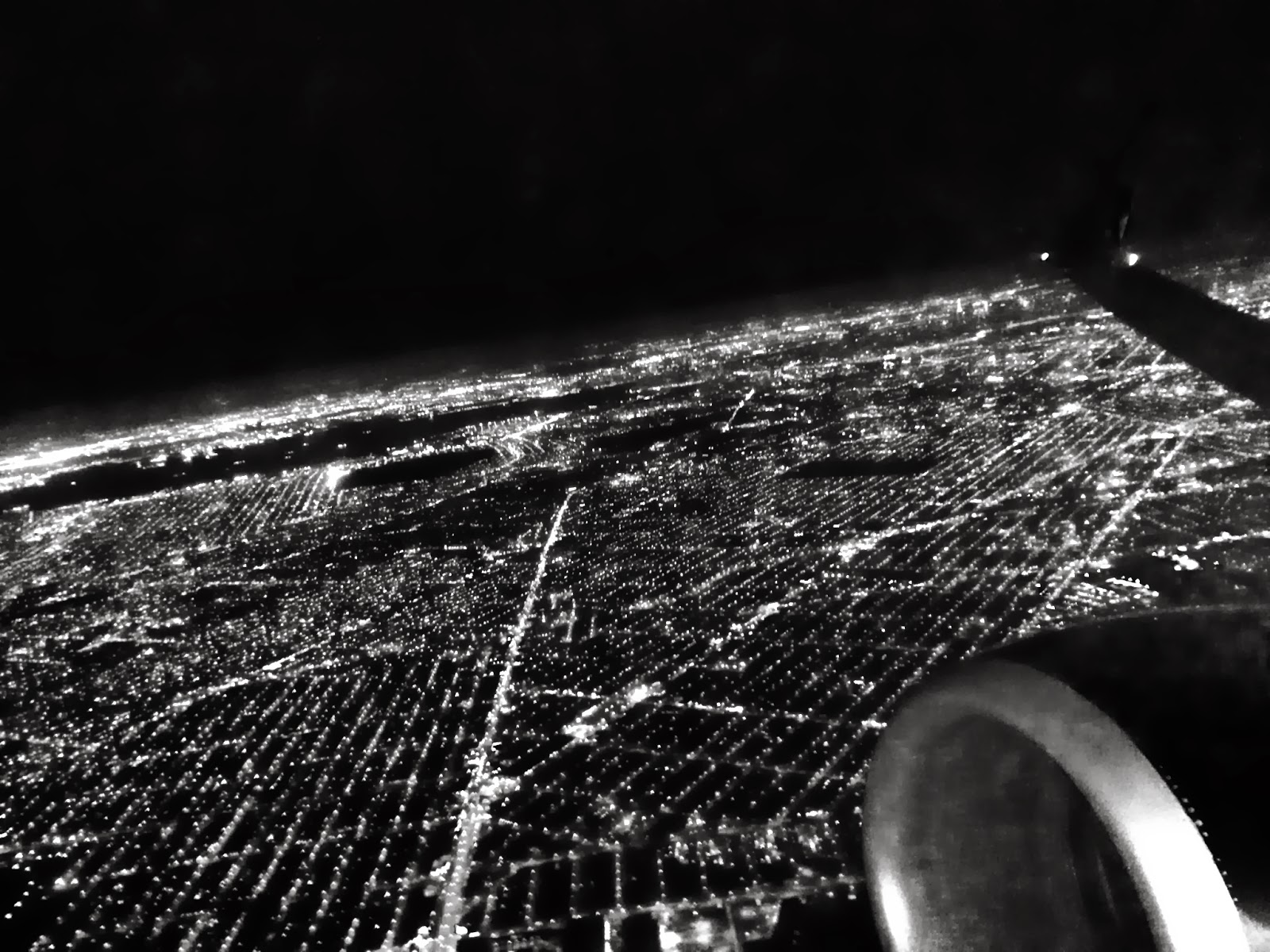 Taking off from JFK Airport last Thursday, I snapped this photo. Getting set up on GoGo wireless, I could not have imagined what would transpire in just a few hours.

Here is the play-by-play.

We were about 2 hours and 30 minutes into the flight from NYC to SAN when the announcement comes that shakes everyone on the flight to the core. “Is there a doctor on board? Please, if anyone is a doctor on board, please identify yourself and come help us in first class.” It was a strong request for help.

I sat up in my seat and looked back to see if there was a doctor on board, and unfortunately, the people on the plane seemed frozen- there was no doctor.

Jumping out of my seat, I ran to first class, and could immediately see an elderly lady on the ground, who had lost all her color. She was staring lifeless and breathless at the ceiling of the airplane. The flight attendant was starting chest compressions and he was concurrently trying to see if she was breathing, which she was not. I corrected her head position and started mouth to mouth pushing air into her lungs, as the focused flight attendant Ryan Moore kept yelling, “Bring me the AED, bring me the AED!” to the other flight attendants. Ryan was the most professional, well-trained airline personnel I have ever interacted with. Delta should be proud.

When the AED arrived, he started to open the kit, and get it ready. He moved with lightning speed to set up the equipment and in seconds she had the electric leads and pads on her chest.  As he worked with the equipment, I took over the chest compressions - short bursts, just like the CPR safety video I watched just months before on YouTube.

A pediatric nurse joined our impromptu rescue crew, and as I continued the compressions, she took over mouth-to-mouth breaths to fill the lungs, along with checking for a pulse periodically. “I’m not getting a pulse, I’m not getting a pulse!” she said.  The AED machine then advised a shock, which indicated that her heart likely had stopped.  We cleared the patient and the first shock was issued.

As we continued CPR, the entire plane held its breath, praying that she would start breathing again.

The woman was still unconscious and with no pulse-- time was moving at a snail’s pace.  After the flight attendant put the sticky paddles on the woman’s chest, he yelled “Clear!” to keep the patient from shocking anyone else, and with a beep, the device delivered the first shock.  She seemed to move around a bit, but the shock did not seem to restart the heart - so we kept doing CPR, then delivered a second shock.

And it is here when her rescue breathing started, short breaths as she was gasping for air. The O2 arrived and the nurse and I changed positions and I grabbed the back of her neck and started to talk to her while holding the O2 mask on her face.

I asked her daughter about her age, history, medications, and found out that she had recently been cardioverted from Atrial Fibrillation, which is when the heart goes into an abnormal beat and is then shocked back into a normal beat. It is dangerous in much older folks, because of the risk of stroke, though this did not look like a stroke, this looked more like a heart attack caused by blockage hitting her heart, or the heart going into ventricular tachycardia, but blood clots can occur on flights, perhaps triggered because she was flying with a broken leg.

Her blood pressure was coming back from the readings the nurse was now taking, and her pulse was a locked in 120.

She had been without vitals for about 4-5 min as we performed CPR.

As she started slowly to regain consciousness, I asked her daughter her name, and she indicated that she was called “Nana”, so I started to talk to her, “Nana, my name is Mitch, it’s going to be okay. We’re all here and there is a lot of noise, but listen to my voice, your daughter is here as well. You’re doing fine.” Her eyes were beginning to open and close.

With the application of the O2 mask, she started to feel more and more alert, but still was laying down with only her eyes moving.  “Nana, can you hear me?” I asked, and she nodded slowly.  “She’s responsive!” I said. And the nurse and I exchanged a quick glance of relief.

I kept my left hand around her head and neck and held her head and kept talking to her, explaining to her what was going on. Her sweet blue, fearful eyes looked up at me and I looked down to her, and told her it was all okay, and that she was going to be fine over and over again for the hour. I could see the fear slowly dissipate from her glances and she started to relax as she and I communicated with the tornado spinning around us. I kept talking to her.

Whenever you are going through something of this magnitude, just having someone who cares next to you means the world.  One of the lonely things about dying is that we leave everyone behind as we go to see what’s next. 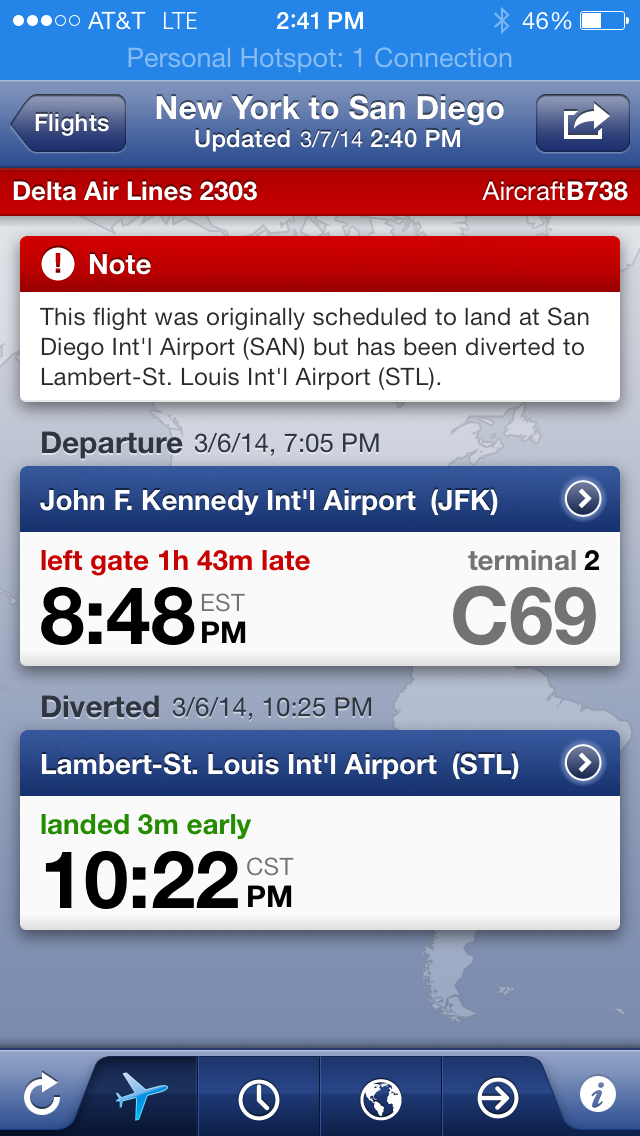 The pilot had diverted the flight to St. Louis and we were descending quickly and heading to the closest airport, you could feel the plane dropping like it was an amusement park ride.  I told Nana we were going to land and that she would be okay.

When I mentioned to her that she was going to the hospital, she also said the sweetest thing. She asked with a mumble through the O2 mask, “Oh dear, how long will I have to stay in the hospital? Will I miss the rest of this flight to San Diego?”  The spark of life in her blue eyes was growing stronger and stronger.  In that moment, it was easy to see a beautiful child, trapped in an aging body, and afraid of inconveniencing her daughter.

I told her “Nana, you’re going to have quite a story to tell, I’ll bet you’ve never landed on a flight while lying down.” She smiled at me through the O2 mask.

Ryan, the flight attendant who performed the two shocks kept taking her blood pressure, and monitoring the AED, while now helping the nurse get an IV line in to her arm, just in case.

Flight attendant Ryan Moore was calm, professional and followed the exact protocol required to save a life.  It was amazing to watch the flight attendants, including Ryan switch from serving customers in a caring way to a rapid response medical team, gathering and deploying the necessary equipment and process to save Nana.

Nana looked up at me frequently now.  I had become her friend.  She would close her eyes every short bit, and then re-open them to make sure I was still there, just inches away - as if to check in on me, even though she could feel my hands around her neck, damp from perspiration.

The compassion of the entire plane seemed to be in my hands as I was holding her head with one hand and the O2 mask placed gently on her face with my other.

As we descended, I stayed with her, holding her in the aisle. When everyone sat back down in their seats, Ryan sat in the chair next to her watching the AED, which was monitoring her heartbeat.

As we approached touchdown, I stayed with her so she would not be scared using my legs to brace myself for landing by propping them against the aisle chairs on either side of the plane.  The flight attendant counted down, 10, 9, 8, 7, then we landed softly when he said 1.

The pilot had performed a perfect smooth landing, and our patchwork medical crew had brought Nana back to life.  Her daughter who was traveling with her was speechless and holding back tears.

We taxied to the gate and the ENTs arrived quickly. We briefed them on the situation and helped Nana sit up slowly, and I passed her off into the arms of an ENT from St. Louis.

I did not realize until I stood up after being pretzel-cramped on the floor with Nana leaning on me for close to an hour, that my legs had gone numb and were now trembling. But I could feel my soul beaming with the amazing visual I will now have in my mind forever of Nana coming to life as I held her head, after we all took turns performing CPR.

Before she left the cradle of my arms and hands, I had said, “Nana are you okay, are you uncomfortable?” and I gently pushed her hair from her face. She replied to me with a bit of a smile and raise of her two bushy grey eyebrows, “Well, I’m most certainly uncomfortable, but I’ll be okay,” and she smiled again behind the O2.

I smiled back at her and she and I were connected - in the way that only two total strangers, born decades apart, who have shared the moments of CPR, the moments of re-entry into life at 30,000 feet.

Though I may never see her again, I will most certainly never forget her.

Nana from Delta flight 2303 will always carry a special place in my heart.

If you can get a defibrillator at your office and or home, it is an amazing, life saving device - please get one if you can. Philips makes a easy-to-use home or work edition, click here for more info.
Posted by Mitch Thrower at 10:42 PM